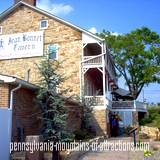 The first floor of Jean Bonnet Tavern is a beautiful restaurant, well known for its exceptional menu and tasty meals.

The second floor is the bar area. A well known fixture there is its antique spinning wheel. It sets away from the area of the visitors. It's common to be sitting at the bar with nobody near the spinning wheel and it will slowly start spinning.

Several times over the years I have heard tales of a ghost haunting by a man dressed in olden-day clothing, along with wearing a Quaker hat. What is strange is the reports say that the ghosts legs are missing from the knees down.

It is said that after the new owners installed a false floor in the tavern, (that is when you put new flooring over the top of the old flooring). Apparently this Pennsylvania ghost doesn't realize he's still walking on the old flooring. Any visitors that has seen him swear he looks like he is walking on his knees. 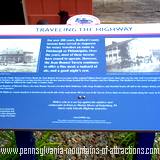 Bedford, PA is a beautiful historic area to spend a day or family weekend get-away. Known for their wonderful antique shops and unique buildings. Take a walking tour in downtown Bedford and you'll be walking along the same path as historic figures like George Washington, and Mad Anthony Wayne.

Another interesting Haunted Pennsylvania Attraction that is only a few miles from Historic Jean Bonnet Tavern is the Historic Hotel Lincoln , known as "The Best Little Historic Bordello in Pennsylvania". It is now an antique shop.

You can also enjoy attractions like Old Bedford Village, and the Fort Bedford Museum. Within a few miles from Bedford is the site of Flight 93 crash site. Visit PA Memorials to read the story behind the Flight 93 Memorial and directions to what is now called "The Field of Honor".

Check out PA State Parks and read about Shawnee State Park , named after the Shawnee Indians that threatened to attack Historic Jean Bonnet Tavern in the 1700s.

There are so many Historic Haunted Pennsylvania attractions in Bedford that the Bedford tourism offers a walking lantern tour. Guiding visitors through the haunted areas and telling the unique stories associated with the many attractions.