What Are Ghostly Orbs? 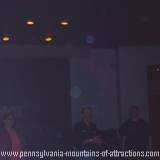 This picture is the digital picture I took while in the Altoona Railroaders Memorial Museum Ghost Hunt Conference Room.

If you look closely you will see several ghostly orbs. The conference room was full of ghostly orbs, some were floating, others were resting on the ceiling, walls and seats.

What is an ghostly energy orb? I certainly had no idea before I attended the Pennsylvania Ghost Hunt.

We are all creatures of energy. Every living thing, people, plants, animals, all have energy fields. This has been proven over and over by science. The naked eye can't see an energy orb. Although, the naked eye can see or catch a glimpse of a spirit, or ghost.

The Ghost Research Foundation's Ghosthunters explained, when we die our bodies will eventually start to decay but our energy lives on. It's a matter of choice where you place that energy. Some have no desire to leave their homes, or place of death, or a favorite place they frequented in life. Maybe they just want to stay near family and loved ones. Nobody really knows why these energy fields are in a certain place at a certain time.

A ghostly energy orb is perfectly round and transparent with a waffle-like texture. Some people confuse energy orbs with dust or moisture caught on a digital camera, when you look close you can tell the difference.

4 Floors of Ghosts
In Every Nook and Cranny

The first place our guide took us was into the office conference room on the 4th floor. He turned on his tape recorder at the Altoona Railroad Museum Pennsylvania ghost hunt and asked if Big Boss was there. He explained, he had talked to a spirit at an earlier date and the ghostly spirit called himself, Big Boss.

We were instructed to ask questions but strangely, my tape recorders batteries kept going dead, and so did our guides. I just put new batteries in all my equipment before leaving home. My camera batteries also seemed weak. Our guide explained this is common when there are spirits nearby. They draw on energy fields and drain batteries.

Our guide introduced us to the children's play area on the 3rd floor at the Altoona Railroad Museum. He explained he couldn't stay in there with us because he has had many disturbing encounters there.

The children's area was once the Pennsylvania Railroad Infirmary. This is where many Railroaders went when scolded by the steam.

In this area our batteries kept draining and everybody felt a strange vibration over one table that couldn't be explained. It felt creepy and I wondered why they would make this area for children to play in.

This was also the area that the Ghost Research Foundation picked up children laughing on their tap recorder after the museum was closed.

Our guide was more than ready to go to the second floor where Kelly's bar is located. Below is a picture I took over a case of empty beer bottles. It looked to me like our ghostly railroader was sucking on the beer fumes! 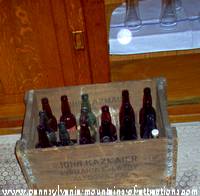 Kelly's bar is a replica of the original Kelly's bar, located in Altoona. Many railroaders stopped in to chug a few beers down after a long day working on the Pennsylvania Railroad.

I noticed our guide taking out his pack of cigarette and tearing off the filter and laying it on the bar. He explained he does that each time he visits Kelly's Bar. He was told they only smoked Camel cigarettes, so that was why he ripped the filters off. He went on to explain, when he comes back to the bar later the cigarette is either moved or gone, and you can always smell smoke.

Later, during the debriefing, the second group that followed us into the bar exclaimed how they couldn't get over the smell of cigarette smoke in the bar. Especially since there is absolutely no smoking allowed in the entire museum.

Once again we gathered into the conference room on the first floor for the debriefing. The Ghost Research Foundation went around the room and heard stories from each group.

This is where I heard the stories of the group after us smelling cigarette smoke in Kelly's bar. They had no idea our guide left a cigarette behind.

One in particular was painful to listen to. The Ghost Hunter asked, "How did you die?" The answer was unmistakable. "Steam, steam burn, Lord it was painful."

Read the testimonies of many employees and more proof of ghost sightings at the Altoona Railroad Museum.

There are many fascinating stories from around the Allegheny Mountains, and more pictures. Follow the link back to Haunted PA and read more stories from our area.