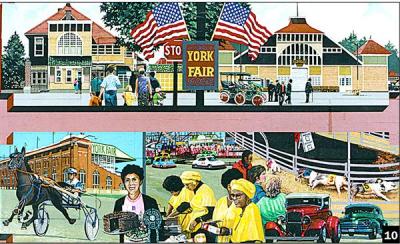 The traditions of fairs in the New World began with the York Fair, America’s first fair, held in the historic old Town of York in 1765, eleven years before the nation was founded. A charter to hold that fair was granted to the people of York by Thomas Penn, son of William Penn in recognition of “the flourishing state to which the town hath arrived through their industry.” Those early gatherings were reported to have been “the liveliest days of the whole year.”

At that time, the York Fair existed as a two-day agricultural market on the town commons, now known as Penn Park. Records don’t tell us too much about the York Fair during the American Revolution or the War of 1812, but we know the troops passing through York camped in the commons, so they would have shared the grounds with the Fair.

In 1853 a group of prominent York County agricultural leaders formed the York County Agricultural Society for the purpose of making the fair a three-day event and finding it a new home. That society purchased seven acres and established a new fairground in 1856. The new location was on what was then the east side of the City of York near what is now Queen Street and King Street.

In 1861, within days of the firing on Fort Sumter, injured Union soldiers were placed in temporary hospitals set up in the old Penn Commons and in the new fairgrounds. In 1862 the Secretary of War made those hospitals permanent so by fair time that year, the halls and grounds were filled with wounded from Antietam and the fair was closed until 1865.

Following the Civil War, the York County Agricultural Society, in 1888, decided the fair had once again outgrown its grounds and these early fair leaders purchased land and moved the event to the 73-acre site that was eventually expanded to become the current York Fair/York Expo Center property.

The fair remained open after the outbreak of World War I, but was not held in 1918 due to an influenza outbreak that killed 166 people in York.

Over the decades the Fair has changed in many ways in order to keep attracting people. As tastes in entertainment evolved, the fair added horse races, dancers, strong man competitions and all kinds of new things to look at and enjoy.

In 1926 a new Grandstand was constructed and the fair it became a five-day event, opening on Tuesdays and closing on Saturdays. The daytime nature of the fair passed into history two years later in 1928 when the York Fair stayed open in the evenings on Wednesday, Thursday and Friday. Tuesday night was added in 1931 and a year later the fair remained open on Saturday evenings.

During the ‘30s the midways became lines with so-called “freak shows” and automobile racing became popular on the track.

During World War II most fairs and the Pennsylvania Farm Show closed, but the York Fair, whose president at that time was Samuel Lewis, stayed open, causing plenty of controversy. In 1942 the fair dates were changed so that the event moved from October to September where it is celebrated to this day.

The Fair constructed its first all-weather year-round exhibition building, Memorial Hall, in the 1950s and began renting that facility to outside promoters for non-fair events throughout the year.

The York Fair remained open throughout the long war in Vietnam and in 1975 it was expanded to become a nine-day event including two Saturdays and a Sunday.

Older fair buildings including Horticulture Hall, Old Main and the Banquet Center that includes the Pennsylvania Room and White Rose Room were rehabilitated, weatherized and air conditioned and then rented year round just like Memorial Hall.

Memorial Hall was then expanded, more than doubled, in 1995 with the addition of a second clear-span exhibit room and a spacious lobby, rest rooms and ticket offices.

Then in 1997 the fair itself expanded to become a ten-day fair that includes two full weekends. It now opens on the first Friday after Labor Day and closes on Sunday of the second weekend.

The York Fair was underway during the tragic events of September 11th, 2001, when terrorists attacked the World Trade Center in New York and the Pentagon. The fair remained open in the days following the terrorist attack, since the Board of Directors felt the fair was a showcase and celebration of American culture that had been attacked without cause.

Today, the property purchased by the Society back in 1888 serves the community all year long. More than 160 events are booked into the fair’s buildings and grounds every year. These popular happenings include Street Rod conventions, train shows, motorcycle events and many kinds of trade shows and spectator events.

To expand that success, the York County Agricultural Society constructed its new Toyota Arena in 2003, creating 114,000 square feet of rent-able year-round exhibit space for the York Expo Center and a new home for all the livestock events during future celebrations of America ’s First Fair. In its first year of operation, the Toyota Arena hosted the Grand Ole Opry, graduations, conventions, car shows, trade shows and a major political rally for President George W. Bush.