The Lost Children Of The Alleghenies Monument 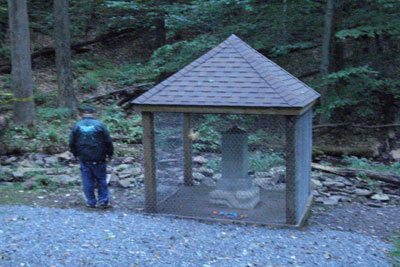 This is the monument as it is today, gated off thanks to young dumb vandals

This location i knew nothing about till i has about 16, I found it out from my friends on Williamsburg,pa and investigated the story myself online. This is the story of what happened:
The story of the monument starts long ago. In the morning of April 24th, 1856, Samuel Cox set out to do some hunting from his family’s small house in an area known as Spruce Hollow. When he returned later, he and his wife discovered that their two sons, Joseph (age 5) and George (age 7), were missing. Mrs. Cox thought maybe the boys followed their dad hunting without him knowing and may have gotten lost in the woods.

Even to this very day the woods in that part of the mountains are very dense and deep you can be easily lost in them. My father and I were hunting in the woods of Bedford County one time and ended up getting lost for quite a while. Back then I’m sure it was even more difficult to find your way around, especially if you’re a small child with wolves and other ferocious creatures lurking about in the darkness.

Samuel scoured the area around his house but could not locate them. He asked neighbors in the surrounding area for help, but after a long search no trace of them could be found. It was getting dark out and it broke everyone’s hearts knowing the boys were all alone and without food and shelter in the cold snowy mountains.

Hunters, trappers, neighbors and everyone from far near joined in the search. As time went on over a thousand people were involved in the search for the missing boys. Large fires were built on ridge tops in the hope that the children would see one of the fires and make their way to safety.

As day after day went by with no sign of the boys, rumors began to spread about the area and people started questioning whether or not the boys actually disappeared. Some laid the blame on the parents for secretly murdering them. One man in particular, Charley Ross, ended up searching their house and torn through it. He dug up floorboards and gardens looking for any clues to their disappearance, but nothing was discovered.

Neighbors and those involved in the search began getting desperate and turned to anyone they could for help. A colored man in Morris’ Cove was unsuccessfully brought into the search using dosing rods to try and locate them. Still others turned to a witch from Somerset County who ended up taking misleading everyone and taking a search party on a wild goose chase.

About a dozen miles away from the Cox family lived Jacob Dibert. He experienced a strange dream that dealt with the disappearance of the Cox children. In his dream he was searching an unfamiliar area of the woods where he came upon a deer carcass on a trail. He continued on past the deer and found a child’s shoe and further on he came to a small stream with a fallen beech tree that allowed him to cross to the other side. Once he crossed the other side he found the boys dead underneath the roots of a fallen birch tree.

Jacob told his wife of the dream, but they decided to keep it to themselves and dismissed it as nothing more than a dream. It was only after the dream repeated itself a few more times that Mrs. Dibert told him to go see her brother Harrison Wysong about it. Harrison was familiar with the area the boys disappeared in and he said the place described to him in Jacobs dream sounded a lot like a place he knew of.

They two men quickly set out to find the boys and soon enough they came upon a deer carcass, a child’s shoe, a beech tree across a stream and finally to the bodies of the Joseph and Samuel Cox who had apparently died of exposure due to the cold spring nights and lack of food. The boys had been missing for about two weeks and were found on May 8th 1856 in exactly the same manner as in Harrison’s dream. No one searched near the area where they were found because it wasn’t thought they could cross Bob’s creek.

Upon finding the children, church bells tolled all in small towns all across the Allegheny Mountains to let everyone know they had been found. The boys were buried together in Mt. Union Cemetery on May 8th, 1856. It was said over 5,000 people showed up for the funeral and it was the largest one ever in that part of the mountains.

This story comes from a book by Charles M. McCarthey of Huntington, PA who wrote the book in 1888. He interviewed the Cox parents who were still alive at the time and did at lot of research into this fascinating tale. His full book, titled The Lost Children of the Alleghenies and How They Were Found, was published in 1941 and this was the main source I used in getting my information. The full story can be found in an online form at http://www.camgenpa.com/books/LCA/p0001.html

Now, this is MY story... I was 17 the first time i went there, in the dead of night in the middle of summer with a group of friends. It was dark and pretty creepy, but I'm a tough girl and it didnt really get to me that bad.So, we slowly made our way up the walking path, and it was so dark we couldnt see. So, my friend took off his shirt and wrapped t around a big branch and made a torch for us all.As we climbed up nothing at all happened. We got to the monument and had a moment of silence for the boys, took a few pictures, and stated back down slowly, as our torch was nearly dead.As we did we stopped frequently cuz we kept hearing someoe following us off the path in the woods, and kept hearing the giggling of two young boys. We got the the first bridge on the way down and all hell broke lose! You could hear the sounds of a little boy drowning!!! So we jumped back and stood there for a minute to collect ourselves, and as we did rocks starting pelting us from all directions.. from above and all sides, and i gaurentee we were the only poeple there this night. So with this, we hit the shoe leatheer express and tore over the 2 bridges and dived for our two cars. We unlocked our doors as fast as humanly possible and got inside, locking the doors and keeping all windows up, considering rocks were still being thrown at us. As we tore off down the dirt road to get back on the main road we all saw a fire shoot out of the ground on the left side of us, and a figure in a black cloak standing before it. We tore off even fasted and within seconds our friends in the car behind us werent behind us anymore. We got the the end of the dirt road, back on the main, and chilled at the pull off spot to wait for them. Now, the people in the other car had been drinking some, hence y we took two cars, we figured if they are dumb enough to drink and drive thats on them, but none of us sober people wanted to ride with them! So, about five mins later they come tearing out and park next to us. We rolled down our windows to chat about why they stopeed and didnt follow for a minute. And i swear on all thats holy these people were so pale white it was creepy... they told us " Dude, we HAD to stop. Two little boys ran in the middle of the road right in our way! And when we stopped they laughed at us and just walked into the woods, dissapearing into thin air as they did!". Everyone in that car was now COMPLETELY sober, which was belief in them enough to me that they were telling the truth. I have been up thier since. Once in the winter with my best 2 friends and their father. We got almost to the monument and foot prints of a small childs appeared out of nowhere, just magically etched in the freshly fallen snow (snow was falling for about an hour, so these prints were fresh and started from nowhere, with no other prints in site considering this is trecherous road in winter and noone really comes up this time of year.). There are stories that Mrs, Cox visited a local witch when her boys were missing, and some believe she had something to do with them not returning. This is what we think we saw on the side of the road at the fire. Needless to say, this place is VERY much haunted and very much sacred , and should not be taken lightly. I went up about 3 months ago and did an EVP sessions with my fiance and a few of our friends and got some amazing results. My fiance says can you *9come out and talk to us? I promise we wont get scared? and in the recording you hear a little boy say "YES". Then shortly after i try to be authoritive, like a mother which i am, and say.. thats enought young men. You have to the count of five to get over here! As i say one you hear "ONE", then i say two you hear "Two" and i am counting rather slowly. Then you year " ONE TWO THREE FOUR FIVE ONE TO THREE FOUR FIVE" Over and over till i get to five then you hear a giggle. They were maikng fun of me counting so slow!!! I am a true believer in this site and if directions are wanted just ask i will sned them to you. Contact me at violent_silence_constant_chaos@yahoo.com