The Haunted Mansion in the Woods 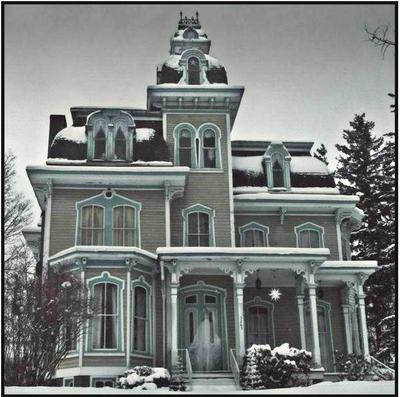 Hello all,
I would like to tell you about the Hegarty Mansion in Beccaria, Pa. I have worked and stayed there overnight. When I first met the person that owns the mansion, they would tell me stories of paranormal things that happened to them. I would listen with interest, but I was the biggest skeptic around. That is, until unexplained things started to happen to me. The owner had ask me if I would be interested in helping with set-up for Halloween. I am all about learning something new and immediately told the owner yes.
At this point in time, for Halloween, we would put black sheets in the window with push pins. I was on the second floor, alone, in what was then a storage closet (now the prop room). I was up a ladder and leaning to the right pushing one of the pins into the frame of the window. I had only one side pinned up and the other end, to the left, was just hanging there. Suddenly there were three distinct tugs on the bottom of my shirt. I turned my head quickly and looked down and there was no one there! I went downstairs and the owner and a friend were in the kitchen. I told them about my experience and they both smiled, knowing that I was going to become a believer fast.
A few months later, Joe, who is on the investigation team for Ravenwood, had his original team at the mansion one night and another group from the area joined them. There was a woman that had came down from Maine and considered herself a sensitive. I gave them all a tour of the mansion prior to the beginning of the investigation to help familiarize them with the layout of the mansion. When we went into the room where my shirt had been tugged, the woman that was sensitive looked at me and said, “you were touched in here.” I ask what would make her think that. She then said to me, “there is a little girl here and she is giggling. She said to tell you that you were hanging it crooked.” Well, yep, believer from that point on. Just reliving that will give me goose bumps every time.
I have had a lot of other encounters at the mansion since then. Black shadows, voices, singing, music, footsteps, etc. We have some very good Class A EVP's also. They have never been malicious, just playful. They seem to just be curious. I would challenge anyone that is a non-believer to come for an investigation. I bet you will walk away a believer.