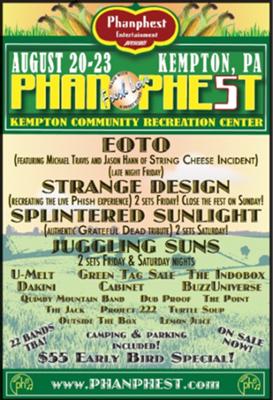 Tired of the over-priced tickets from companies who keep treating patrons with less and less respect, and the ever changing face of the music industry? We started our festival by live music phans for live music phans.

Family friendly environment with flush toilets and showers, car side camping, and a variety of up-and-coming musical acts will please everybody from the littlest toddlers to the oldest scenesters.

Building our company on word of mouth and grassroots efforts, Phan Phest proves year after year that we are serious in what we do...we host a weekly show in Asbury Park, NJ, and pride ourselves on our "musical connectivity" and how we treat our phans.

A must do festival for folks tired of insanely large crowds and sketchiness. We aim to keep it real with good vibes, consciousness and awareness, and love. Be kind, respect one another, and have fun!!

We're stoked to announce the next round of bands added to what is surely going to be our biggest and best event to date!!

We're not nearly done adding bands to Phan Phest 5.0 - we're going to have at least 42 bands this year and more will be added to the line-up in the coming months!!

We've added some of the best up-and-comers to the already PHANTASTIC line-up!

We've already announced that EOTO (featuring Michael Travis and Jason Hann of String Cheese Incident) will be doing a marathon 2-and-1/2 hour set of late night improvised dub step and livetronica on Friday night! Strange Design will be recreating the live Phish experience with 2 sets on Friday night following a 2 hour set by Phanphest favorites Juggling Suns! Juggling Suns will also play another 2 hour set following 2 sets of Splintered Sunlight recreating music by the Grateful Dead on Saturday night! Strange Design will also close out the festival on Sunday night with another special set of Phish!

We're pleased to announce that U-Melt are returning to Phan Phest this year for a set on Saturday!! Green Tag Sale will not only play a late night set of music on Saturday night, but will also be rockin' out the campground on Sunday for another set of what they've labeled as "TRON!" The Indobox will return to Phan Phest this year and share late night duty with GTS on Saturday night. Local favorites Dakini will not only play a set of music on Saturday evening, but will also be jammin out on Thursday night!

Long time Phan Phest veterans The Jack will be lighting up the campground stage on Saturday afternoon with their Southern style blues and jam vibe - we're glad to have them back once again! Our winners of the Battle of the Bands last year, Project 222 make a triumphant return to the festival on Sunday right before BuzzU! Top Groove Act of 2008's Asbury Music Awards and jam sensationalists who smoked the 4 PM slot last year Turtle Soup retain the same timeslot this year at the festival for your heady listening pleasure!

New comers, multiple award winners, and young blues sensations Outside the Box make their festival debut with us on Saturday afternoon! And, the other hot young act from the Jersey Shore, Lemon Juice, will help kick things off early on Friday!

Plenty of more acts will be announced over the next few months, but do you really need to hear more before getting your Phan Phest 5.0 tickets?

Save $20 off the gate price, and help support the festival as we spread the good word to good people all around the tri-state area and beyond!

We're looking forward to seeing you in August!! Physical Phan Phest 5.0 tickets are in, so for those of you who have already ordered them, stay tuned to your mailbox for your tickets! They should be mailed out over the next few weeks! And, thanks to our ticket sponsor The Saint!

At the 5th Annual Cabin Fever Phest, we announced both Outside the Box and Turtle Soup as officially playing Phan Phest 5.0! We also announced some other bands which were not playing Cabin Fever:

Strange Design, from South Carolina, will be recreating the live Phish experience as Friday night headliners with 2 sets, as well as closing out the Phan Phest 5.0 festivities on Sunday evening with one long set. (We decided to do this due to the difficulty that so many people had trying to get Phish tickets...when we realized that Phish was beyond our means for this year's fest, we went with the next best thing, Strange Design!)

Following Strange Design on Friday will be the power combo of Michael Travis and Jason Hann (of String Cheese Incident) doing late-night duty with their dub step and improvised livetronica known as EOTO. This is the real deal and where it's at! Kangfirmed!

Pennsylvania bluegrass act, Cabinet, will be playing a one hour set at noon on Saturday. We are thrilled to have these up-and-comers on our event, because they are blowing up Pennsylvania with their amazing performances.

Green Tag Sale to play multiple sets at Phan Phest 5.0...a late-night set of Tron for you on Saturday night, as well as another one sometime during the weekend.

Juggling Suns make their Phan Phest 5.0 return in style...playing a nice long set before Strange Design on Friday, as well as another nice long set after Saturday's "headliner" closing out the main stage...

Splintered Sunlight plays two sets of the Grateful Dead on Saturday night, right before Juggling Suns. This Philadelphia-based Grateful Dead tribute band does it the way it should be done. With Butch Sochrow on lead guitar and Jerry-vocals, and Tom Donovan on rhythm guitar and Bobby-vocals, this is a band that consistently slays on stage. They consistently pack the Stone Pony...and Butchie is lovingly referred to by many names, such as "China Jerry", "Asian Jerry", "Korean Jerry", and "Eskimo Jerry."

There will also be a very special clown parade at Phan Phest 5.0!!