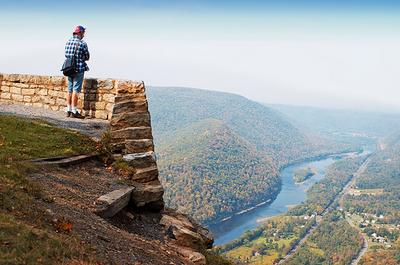 West Branch of Susquehanna River Valley from atop Hyner View

Held in Renovo, Western Clinton County PA, the second weekend in October every year since 1949, the PA State Flaming Foliage Festival features the grandeur of the fall color palette displayed in the Allegheny Mountain Range area of the larger Appalachian System in North-Central Pennsylvania. The festival runs from Friday through Sunday and includes talent show, dances, hundreds of craft, services, and food vendors, a parade through the town featuring the "queens" representing area high schools and climaxed by the crowning of the Flaming Foliage Queen on Sunday. Renovo is mid-way on the Route 120 "Scenic Bucktail Trail" which runs along the West Brance of the Susquehanna River from Lock Haven to Emporium. This is one of the few unspoiled stretches of wilderness in the Eastern U.S. Wildlife including deer, elk, bear, wild turkey, and grouse abound.