Our Night at The Triangle in Gettysburg, Pa 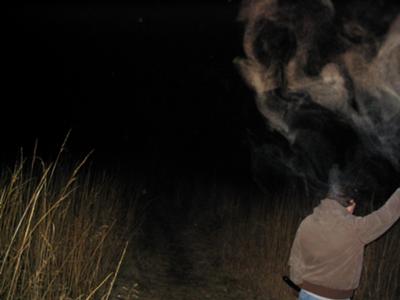 Brian's encounter at the triangle

We go to Gettysburg about twice a year and have had quit a bit of luck with strange encounters. We took 2 friends with us this time.

My husband and his friend Steve were at the top of Devils Den heading toward The Triangle and Shelly and I were heading toward the slaughter pen across the street from the Devils Den. My husband was in the lead walking down the path at the Triangle and Steve was following close behind taking pictures as they walked. Steve happened to take a picture of my husband and was shocked to see what showed up on his camera. He said he was ready to drop the camera and run.

What do you think of the photo? I can tell you the arm that is raised contains his camera and the lower left hand is holding a flashlight. He was not smoking and there was no fog in the area. It was a clear summer night.