Our Haunted Home in Port Matilda 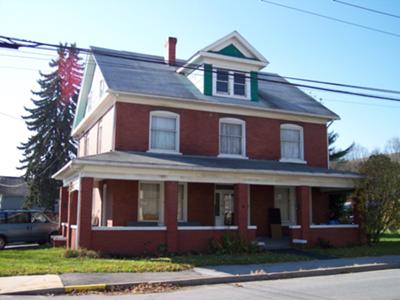 First, some quick history: Our home was built in 1900. We bought it in 2005 and the previous family living there said it was haunted. There was a rumor that someone hand hanged themselves in the attic. It was also a funeral home for a period in the late 50's. I did extensive research on the property from before the home was built up to when I bought it and learned about every person who lived in the home during its history, including decades of renters from 1925 through 1980. The first thing I found was that no one killed themselves in the home. However, there were three deaths (not counting the funeral home bodies). The woman who had the house built died there of illness in 1903. The second owner was a doctor who passed of a heart attack in 1913. The last death was of a renter who died up the road in a work accident in the late 1940's.

We didn't have any hauntings when we first moved in. Those didn't start until a year or so later. The previous family had doors open, lights get turned on and such. For us, those things happened only when friends with children would be in the house. If children were downstairs, lights upstairs would get turned on and doors opened. The previous family had children and we have none. We've come to think that these things are responses to the children. The first owner had no children, but would often watch many children in the neighborhood.

We also have had the deadbolt on the front door get locked. I went out one afternoon to cut the grass and when I finished, I tried to get in, but the deadbolt was thrown. I got back in through the back door and checked the front. The deadbolt was fulled locked, which is not easy to do. It doesn't fall into place, you really have to push it. I was the only one home.

In early August 2009, one of my dogs (Prince) died of heart failure. He was very attached to me and would sit on the couch next to me and rest his head on my shoulder. If I was out at a meeting at night, he'd lay in my place on the bed until I came home. When I would leave for work, he'd howl the moment he heard the front door close and the other dogs would start howling as well. If I went to the bathroom, he'd stand outside the door and bump at the doorknob with his nose wanting to be let in. A couple months after he died, things in the house started to change. The dogs started howling again (something they hadn't done after he died). My wife said she'd feel a dog get on the bed when I wasn't home, but when she'd reach over there was nothing there. It made me wonder, but I dismissed it. Then one evening I brought the dogs in and put them in the bedroom. I walked back over to the back stairway to turn off the light and I heard a dog walking on the floor in the kitchen. Thinking one of the dogs had stayed downstairs to get a drink, I went downstairs to see which dog it was and get it up to bed. I turned on the light in the kitchen and it was empty. I knew I heard a dog (I have labs, so they're not quiet when they walk on tile) and then I was pretty certain Prince was back. A few days later my wife was upstairs with the dogs and I went downstairs to the bathroom. The doorknobs started to wiggle up and down. I opened the door, but there was nothing around.

The arrival of Prince as a ghost in the house set off other activity. A second ghost we would only sometimes hear started to be a daily event. This ghost can be heard opening and closing the front door, walking down the hall and then climbing the front stairs. Sometimes the dogs react to it, sometimes not. It has been loud enough that I have ventured into the house with a gun certain someone had broken in. My wife and the dogs were certain I had come home one night and then she was puzzled why I didn't come into the bedroom after I got to the top of the stairs. She checked and I was not around. I got home an hour later. This ghost we believe is the ghost of the man who died up the road in an industrial accident and is just always coming home. Once I was certain Prince was back and the constant noise of the walking ghost was beginning to really bother us, I started to talk with Prince and tell him he could go. Prince used to climb the fence and then head down to the creek to swim. I kept telling him he was a good boy and he could go and hoped that he would understand those simple things as he had when alive. Within a few weeks, Prince was gone and the other activity died down again.

Recently I set out all my clothes and items I needed for the next day the night before down in the living room because I needed to be up at 5am and headed out. We went to bed and when I got up and went downstairs and started to get ready, I noticed a silver cross and chain of mine sitting in the middle of the table next to the things I had set out. I figured my wife had found it and set it there, although I hadn't seen in there just six hours before when I set everything out and went to bed. I was out all day and found out my mother had a mild stroke during the night, so I forgot about it. The next morning I was watching a dvd and was reminded of it and asked my wife if she knew where that chain and cross were. She said it was in the drawer next to the bed. I asked if she was sure, because I thought I had seen it on the table in the living room. She said she was sure and I must have dreamed it. I was sure I'd seen it there, so I got up and went downstairs and it was right there on the table. Concerned it might be a message, I put it on.

That night I heard that walking ghost again, but the dogs didn't. For the first time in awhile, I was alarmed by the sound. I didn't get up to check because I just didn't want to see anything.