Living with Spirits for Nine Years 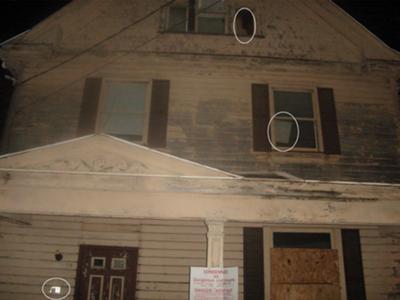 hope this is the right one

I grew up in a very haunted house on South Mount Vernon Avenue for nine years. There was not a night that went by that we did not hear one of the spirits walking back and forth across the attic.

I also saw a spirit when I was five and told my father about him. I told him that he only had one leg and the other leg was a wooden leg. I also told him that I knew he would not hurt me because he did not have a face. It turns out that a few years later when I was woken up by the spirit walking in the attic, this must of been the spirit that I have seen because when he walked you could tell that one leg was not real.

When I was nine I saw another spirit in our kitchen playing with the stove. This was more of a mist but it was turning on and off the different burners.

My parents had the kids go to my grandmothers house while they had a medium come into our home to see what she could tell them. She said that we had three spirits, an older lady who liked to sit at the attic window and watch down the street, an older gentleman who moved throughout the house but liked the attic also, and a younger gentleman who warned her of a bad outlet in the basement and for her to tell my parents that this could catch fire. Sure enough it did.

The spirits liked us but they really liked my brother who would get out of bed every night and sleep at the bottom of the attic steps.

Recently I went and took pictures of this house at 12:00 a.m. I took two, something shows up one the second picture that was not there on the first. Although I did move the camera in an upward angle for the second shot so that I could get the attic. Something shows up in the second floor window that was not in the first shot of this window, also you can clearly see an older lady sitting in the attic window looking down the street. Here's the thing about these pictures, the house is condemned with no-one living there and the attic window is boarded up.

That same night my sister and I went to an old cemetery off of Peter Street and I took four pictures in a row, one shot after the other and you can clearly see something developing in each picture.