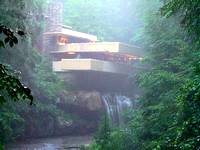 December weekends and the weekend between Christmas and New Year's Day
Closed Mondays except for Mondays listed above.


Lodging Information For lodging information in the area of Frank Lloyd Wright's Fallingwater, please contact the Laurel Highlands Visitors Bureau at 1-800-333-5661 or www.laurelhighlands.org.

From Baltimore/Washington DC area: Take I-70 west to Hancock, MD. Take I-68 west to Exit 14 (Keyser's Ridge). Turn left on to Route 40, and continue west to Farmington, PA. Turn right on to Route 381 north, and travel approximately 10 miles to Fallingwater.

From Columbus, Ohio and Wheeling, West Virginia area: Take I-70 east to PA Route 51. Go south on Route 51 to Uniontown. Take Route 40 east from Uniontown to Farmington, PA. Turn left on to Route 381 north, and travel approximately 10 miles to Fallingwater.