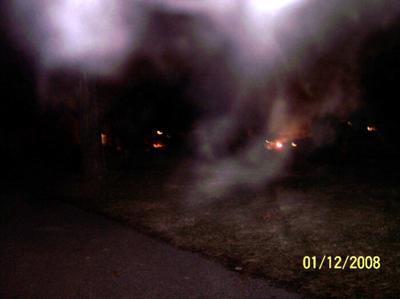 I live in the south hills of Pittsburgh. I belong to The Center for Paranormal Study and Investigation - CPSI( http://www.cpsi-paranormal.org). I also have my own rag tag group that just goes out at random and investigates areas. You can read about those adventures at http://www.myspace.com/micksghosts.

In the area that I live, there are 3 old cemeteries. The oldest in Allegheny County. I love cemeteries. I like to explore them and wonder about the people who are buried there. One night my friends and I got together and went to two just right up the road from me. One is St. Clair and dates back 1802 I believe. The other is Mt. Lebanon and dates back to 1909. In St. Clair we had the feeling of being watched. It has old stones, big monuments and withered old trees. All tend to make some pretty interesting shadows. We started off with some dvr's - digital voice recordings, and of course we were constantly snapping pictures. In one area, Jim said he felt like he was being drawn by kids. They all wanted his attention.

We then went to Mt. Lebo. Before I do any investigations, I always say a prayer to St. Michael the Archangel. I pray for protection, help and guidance. I also pray when I leave asking that the spirits stay where they are and not to follow me home. Before I started doing this, I noticed that after a trip to the cemetery, strange things would happen at my house for a few days following. I then learned that a spirit(s) will follow you home but will only stay a short while before returning. AT Mt. Lebo it was a completely different feel. It seemed like we weren't wanted. I snapped pix and did dvr's. I was sitting on a bench when my two friends stopped and said it suddenly got really cold. One complained that it was so cold his spine was hurting. I snapped pix. In this area we found a tree. In the tree was a rosary. Who knows why someone felt the need to put a rosary there.

When we got back to my place we looked the pix over and listened to the dvr's. In St. Clair shortly after arriving we caught a very friendly voice saying Hi. Another recording complained about the area's dogs barking! The pix showed many beautiful orbs.

In Mt Lebo we caught some disturbing pix. Light streaks and in two - when my friends complained of the cold - we caught pix of mist. No one was smoking and it wasn't cold enough to see your breath. Right before the cold incidence as I sat on a bench, I did some dvr's. I asked who was with me. In response I got a women asking me - rather indignant, who was I? The pix also revealed that as we walked around the cemetery, two small orbs followed us. I mean they were in almost every shot. Always side by side. Sometimes up high, sometimes down low.

I will have to submit more stories later, I have a ton of 'em