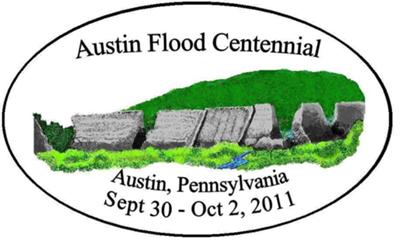 100 years ago, Austin PA was a booming town, home to nearly 3000 people. Immigrants of varying ethnicities came to "God's Country" to capitalize on the plentiful lumber and work in the area's many mills. In 1909, a dam was built to harness water from Freeman Run to power the Bayless Pulp and Paper Mill, the town’s largest industry. While the many citizens of Austin who worked at the mill were grateful for their jobs, others questioned the stability of the dam, and worried what would happen if it ever broke.

On September 30, 1911, Austin found out. Poor construction, coupled with torrential rain, resulted in the dam's collapse. Over 400 million gallons of water were released, destroying everything in its path for eight miles. At least 78 people perished in the tragedy. News of the flood quickly spread worldwide. It was the second worst flood disaster in Pennsylvania’s history, and sixth worst dam failure in U.S. history.

From September 30 - October 2, 2011, the now little town of Austin (population 600) will remember this tragedy and honor the victims and survivors of the 1911 flood. A commemorative ceremony will kick off the weekend on September 30 at 2:00 PM, and victims of the flood will be honored at 2:30 PM, the exact moment the dam broke 100 years ago. Then Austin will turn back the clock to 1911 with food, fun and festivities 1911 style.

Characters in costume will roam the town, while historical re-enactors entertain crowds. Music and cuisine will reflect the varying ethnic groups that comprised the booming lumber town, educational discussions and presentations will provide insight on the dam's failure and town's survival, and recreational opportunities will guide visitors through the grounds of the dam and path of the flood. Plans include hot air balloon rides, vintage baseball, woodhick games and demonstrations of 1911 crafts and trades.

Join us in Austin, PA "The Best Town By a Dam Site", as we remember one of the most important events in Pennsylvania's history. Don't miss Potter County's biggest event of the century - a once in a lifetime opportunity! Visit www.austin2011.com for more information.