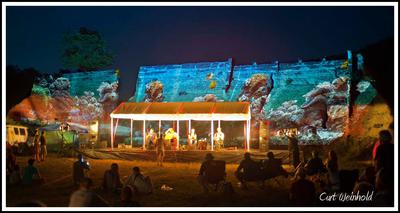 The ruins of the giant concrete dam that failed over a century ago light up at dark. It's a sight you won't see anywhere bu the Austin Dam! 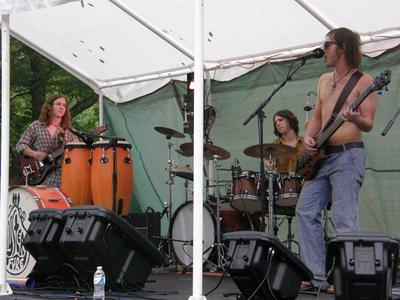 Mystery Fyre of Bloomsburg, PA is a fan favorite at the Dam Show! 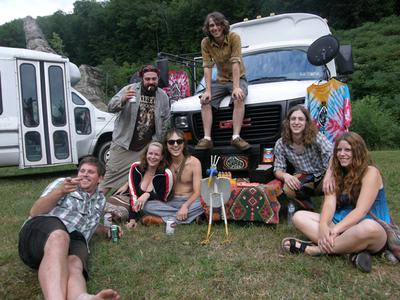 Mystery Fyre relaxing with friends and fans at the Dam Show

The Austin Dam Show is sponsored, in part, by a grant from the Pennsylvania Council on the Arts

On August 23 - 24, 2013, festival fans come to Potter County and the small town of Austin for the Austin Dam Show.

The Dam Show is an annual music festival that brings live music and its fans to the area known as the PA Wilds. The show is held at a most unique venue - the Austin Dam Park, where the ruins of a giant concrete Dam that failed over a century ago still stand. The Dam ruins and surrounding mountains create a natural amphitheater and a Dam cool experience. At dark, the Dam lights up with a colorful, animated lightshow. It's a sight you won't see anywhere but the Dam Park at Austin.

Food and craft vendors will be on site all weekend long. The quality of the music is outstanding and the eclectic variety means there’s something for everyone. Come discover your new favorite band and enjoy camping, hiking, fishing and more at the Austin Dam.

The Dam Show is sponsored, in part, by a grant from the Pennsylvania Council on the Arts. Proceeds benefit the Austin Dam Memorial Association, a 501(c)3 non-profit organization whose goal is to preserve the remains of the Austin Dam and the memory of the 78 people who lost their lives when the Dam failed on September 30, 1911.

Come check out the show! You never know who you’ll discover at the best Dam music festival in Potter County!